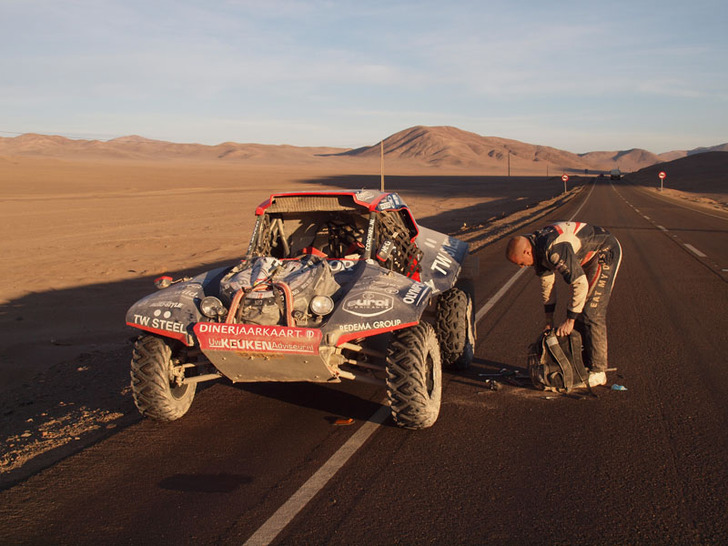 The Dakar rally is one of the most extreme competitions in the world, known for its extreme and long running stages it’s an ideal environment to test new forms of propulsion.

In next year’s rally an electric vehicle waits to be the first in its class to complete such feat.

An Anglo Dutch team headed by Alister McRae (Brother of rally driver Colin McRae) are building an ultra light vehicle powered by an electric motor that is hoping to cover the 9000 km route through Argentina, Chile and Peru, starting on the 1rst of January.

The car is based on a ProDakar McRae Buggy 4×2 that has been finishing the rally for the last 2 years in its petrol driven model, the new evolution will be powered by a 54KW/h Lithium Ion battery pack through a PM motor with 2000Nm(but it will be limited to 120 NM) of Torque and 200 KW power rating with a wheight less than 40 KG .

“We are convinced we can do this, we have brought the ideal partners to prove a green concept in the most hostile and unknown racing environment known.” The International consortium is formed by ProDakar, All Green Vehiclesin conjunction with the Technical Universities of Delft.”

“Range is the biggest issue and top priority. The difficult part of the rally is navigating through the rough terrain. We will have a custom made energy management system with 3 variable settings , eco, standard and full attack, that will help us dose the energy in the batteries combined with the light weight of the car we can extend the range.

For refueling we are currently working  on two concepts Fast charging 15 to 30 minutes to 90% soc at 400v. in refueling points or on race support vehicles and changing the battery pack completely.

An aerodynamically optimized body is been developed in conjunction with  energy recovery shock absorbers that will turn kinetic engine from the ruts and bumps in to electrical energy.

The driver that will attempt to take the car to the finish line is the experimented Dutch driver  Tim Coronel witch mentioned “We wanted to do it for the challenge, driving electric could be fun, imagine all that instant torque!, the only thing we will miss will be the exhaust noise.

Its an enormous challenge – The Dakar rally started in 1978 as a race between Paris and Dakar in Senegal, North Africa. Although now it runs through South America covering sand dunes, mud and stony tracks and the most hostile terrain in the world.

The rally will start on the 1st of January and will last till the 15th of January.